What’s new with the network this quarter? Here’s a Q2 Update! 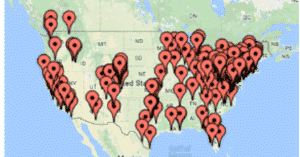 Time flies when you’re busy! We wrapped up a very busy second quarter at the Halt the Harm Network — and we’re excited to share with you the network’s progress and activities.

Here’s the dashboard of our progress toward the network’s 2017 goals so far.

Here are some highlights from our second quarter.

Webinars galore! This quarter was definitely the season of webinars. The team supported five different webinars: one livestreaming an anti-fracking coalition in Oklahoma, another about Public Herald’s new report on misconduct in the PA DEP, another about EHP’s new health registry, one on the Maryland fracking ban from a health perspective and the last one about FracTracker and Citizens for Healthy Community’s new shale and food production map. Total over five webinars, there were 156 participants. You can view all the recorded webinars here.

Local Texas campaign getting hot – Leader Ranjana Bhandari led a campaign to protect Lake Arlington in Texas from a proposed injection well right next to the water. Lake Arlington provides drinking water for over half a million residents of the Arlington and Fort Worth areas. The petition campaign was able to raise almost 3,000 signatures. If you’re a Texas resident and haven’t added your name to the petition, click here.

Extreme Energy Extraction Summit – Leader and operations support member Ryan Clover-Owens attended the 7th Extreme Energy Extraction Summit held this year in Houston, Texas. Almost 100 different leaders across all types of energy extraction were in attendance and Ryan was able to conduct multiple interviews with many. He also facilitated a breakout session on networks. Learn more about the E3C Collaborative here.

National Campaign to EPA – Leader Lisa Graves-Marcucci reached out to HHN about a proposed rule that she and her team at EIP  had petitioned the EPA for, that would for the first time require natural gas processing facilities to report the toxic chemicals they release into the environment. Before we sent out the e-blast on a Friday, the public comment site had been open for a little less than two weeks and had only collected five comments. The Monday morning after we sent the e-blast, the number had jumped to 255. As of June 1, the rule had 5,933 comments. If you’d like to send in a comment, click here.

Network Mobilization Phase – The network operations team began discussing the mobilization phase to transition the network to be independent from Netcentric Campaigns (governance and management and ultimately for fiscal independence). In previous networks we have worked on, this phase can last between one to three years. The ultimate goal is to make sure that 100% of the network’s budget goes to funding work by leaders in the network, to operate the network and its services, to build a group of directors from the core advisory team and new champions to serve as the management transition directors.

These posts are part of our ongoing efforts to continue to provide feedback and transparency into the work of Halt The Harm Network. We hope you can find ways to use this feedback to find new services, connect with other leaders in the network, or find ways to work with us to meet the goals.

As always, if you have questions or want more information, reach out at info@halttheharm.net.  If you are interested in this help or getting involved with any of these specific efforts follow the links below.