No raids, no KKK, intersectional justice shows the way

Those that we work with fight more than the threats of gas industry pollution— they are impacted by racial injustice, housing injustice, worker injustices and more. Our best allies and leaders in the fracking movement are driven by values that focus not only on public health or the environment, but they focus on people, and each other. 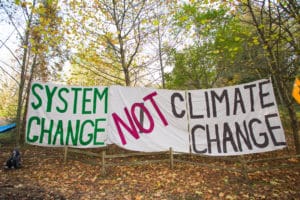 According to NRDC’s 2014 Report, “Drilling in California: Who’s at risk?” 5.4 million Californians live within a mile of one, or more of the 84,000+ existing oil and gas wells. And what may come as a surprise to some but not to many working in environmental justice, people of color make up nearly 92 percent of the 1.8 million people living in those areas “most burdened by environmental pollution as identified by California EPA’s tool (CalEnviroscreen 2.0)” and living within a mile of oil and gas development.

The commitment of the Halt the Harm Network to those leaders working in these communities is to help raise the concerns that we hear to each other and to the broader movement.

Recently, we have had a very moving discussion that demonstrated just how unsettled the landscape is where our leaders do their work. When meeting with the network’s core advisory group, two leaders, one from California and another from Pennsylvania, both expressed deep concern for the heightened level of racism and racist practices they have seen in their communities during their fracking work.  One leader shared their story of how local KKK members have recently increased public recruitment for new members in the same communities where the impacts of fracking are heavy in rural Pennsylvania, and the other leader shared how a recent rise in ICE immigration raids had created fear among community members in Kern County.

For these leaders, fighting fracking’s harms isn’t just about addressing the environmental hazards. It’s about supporting community in ALL their struggles and fighting injustice head on, not in separation nor in isolation.

These are not isolated incidents or fears.  A quick look at the state of Pennsylvania alone — according to the Southern Poverty Law Center, there are 40 hate groups headquartered in the state. And since Trump has taken office, ICE said it has arrested more than 41,000 people as of May across the country in states like California — nearly a 40% increase over the same period in 2016.

So what can we do now?

Here are three things that we are going to do to begin helping Halt the Harm Network’s leaders.

We cannot afford to support communities and build movement in a “business-as-usual” way anymore.

Like all movements, in order for the movement against fracking to succeed, it must be intersectional. We must be prepared to embrace agendas that focus on clean air and water AND embrace the responsibility to fight the corrosive racism that also aims to stifle voices, and dehumanize communities.