How Long Will The Shale Revolution Last? 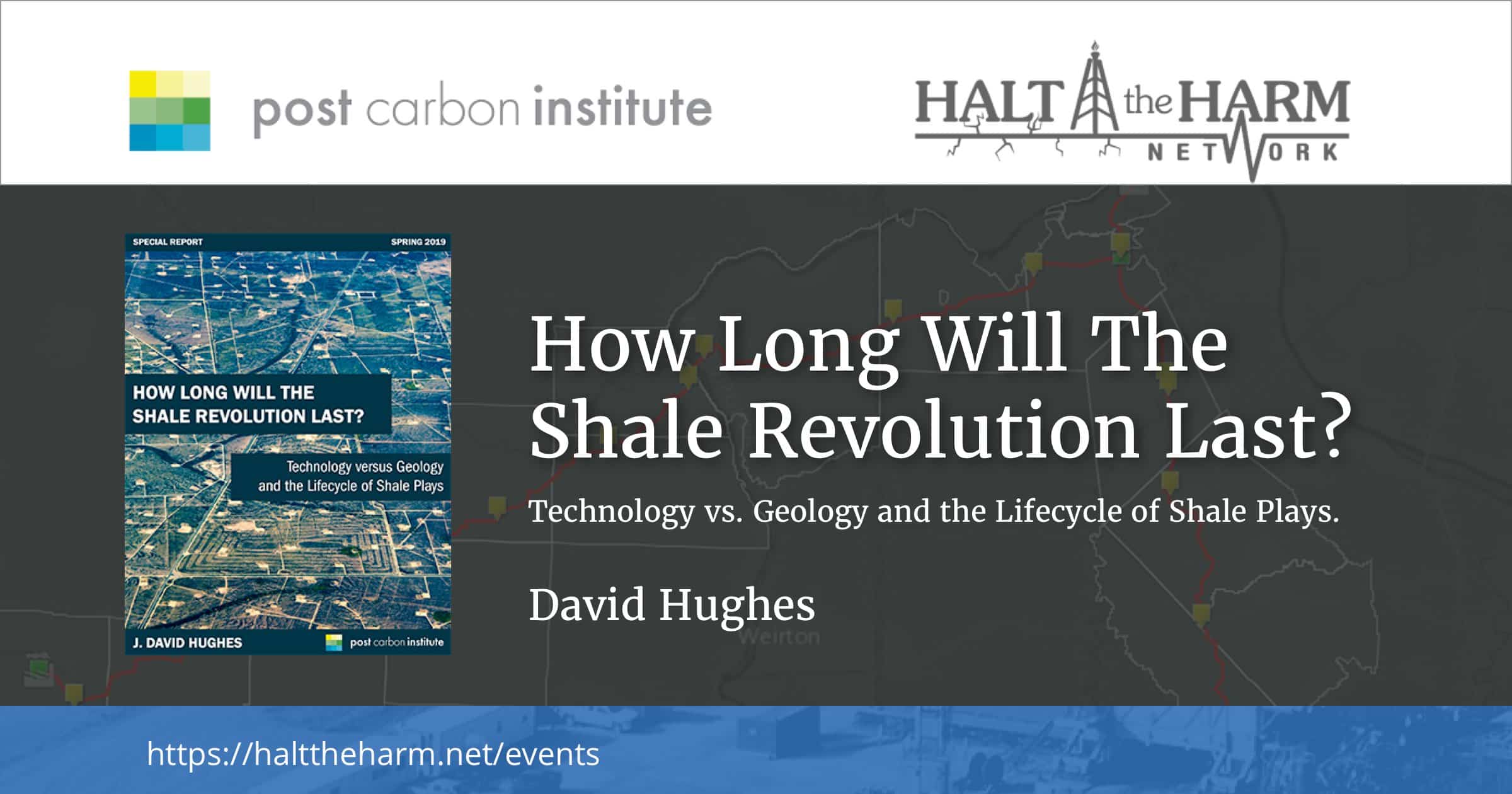 Did you know that the Energy Information Administration (EIA) were forced to downgrade their estimates by 96%? The EIA has a track-record of over-estimating production – which, as you can imagine has a significant impact on policymakers.

The rosy cheerleaders of the “shale revolution” are increasingly looking at a scoreboard that says the jobs, benefits, and recoverable gas will not pan out as they predicted.

U.S. shale oil and gas production has reached record highs only as a result of high rates of drilling and more aggressive technologies including longer horizontal laterals and massive injection volumes of water and proppant.

Click here to register for the webinar, August 14th, presentation and Q&A with David Hughes 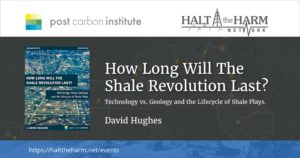 The briefing will cover the key takeaways in the Post Carbon Institute new report and their analysis of the EIA Annual Energy Outlook Report.

If your local opposition, fights your efforts to protect public health, the environment, and conservation efforts based on the dreams of big gas, job projections, and big profits, this information and services briefing is important for you.

Register for the webinar, August 14th 1:00pm EST : How Long Will The Shale Revolution Last?

What you’ll get from this webinar presentation:

Join us on August 14th for a discussion about How Long will the Shale Revolution Last?.

David Hughes is an earth scientist who has studied the energy resources of Canada for four decades, including 32 years with the Geological Survey of Canada as a scientist and research manager. Hughes has researched, published and lectured widely on global energy and sustainability issues in North America and internationally.

His work with Post Carbon Institute includes a series of papers (2011) on the challenges of natural gas being a “bridge fuel” from coal to renewables; Drill, Baby, Drill (2013), which took a far-ranging look at the prospects for various unconventional fuels in the United States; Drilling California (2013), which critically examined the U.S. Energy Information Administration’s (EIA) estimates of technically recoverable tight oil in the Monterey Shale, which the EIA claimed constituted two-thirds of U.S. tight oil (the EIA subsequently wrote down its resource estimate for the Monterey by 96%); Drilling Deeper (2014), which challenged the U.S. Department of Energy’s expectation of long-term domestic oil and natural gas abundance with an in-depth assessment of all drilling and production data from the major shale plays through mid-2014; and Shale Reality Check: Drilling Into the U.S. Government’s Rosy Projections for Shale Gas & Tight Oil Production Through 2050 (in 2018).

Separately from Post Carbon, Hughes authored A Clear View of BC LNG in 2015, which examined the issues surrounding a proposed massive scale-up of shale gas production in British Columbia for LNG export, Can Canada increase oil and gas production, build pipelines and meet its climate commitments? in 2016, which examined the issues surrounding climate change and new export pipelines, and Canada’s Energy Outlook: Current realities and implications for a carbon-constrained future in 2018.

This upcoming webinar with Post Carbon is part of the Halt the Harm webinar series in which members of the network share what they’ve been working on to support the broader movement. These programs are focused on tangible skills or information that you can use to be more effective in your campaigns protecting yourself from the oil & gas industry.

If you have a presentation, campaign, skill, or tool to share with the network, please contact ryan@halttheharm.net to start the conversation.